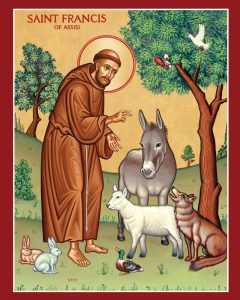 Born Giovanni di Pietro di Bernardone and later nicknamed ‘Francesco’ meaning the Frenchman, St Francis of Assisi is one of the most celebrated saints in the Catholic Church. He was the son of a prosperous silk trader and of noble extraction. In his youth, the young Francis enjoyed the life of opulence afforded by his father’s wealth, which is rather interesting because he would later renounce the affluent life in favor of poverty. Francis founded three major orders in his lifetime: the Order of St Clair which was a monastic order for women, the Order of Friars Minor for men, and the Third Order of St Francis for both men and women who didn’t fit in the first two orders.

St Francis of Assisi is remembered for many things one of which was his love for nature and the environment. Legends attesting to his love for animals and the environment abound. Soon after he died, a collection of legends named Fioretti was written and which contained recollections of interesting events. It is said, for example, that while in the company of his companions one day he came across birds sitting on trees by the roadside. Francis was so intrigued by the birds that he asked his troupe to pause for a while as he preached to the birds. The legend has it that the birds were so enthralled by his voice that not one of them flew away. It is out of this legend that St Francis is often depicted in portraits holding a bird in his hand or surrounded by birds. In another interesting legend, St Francis made peace between the residents of a town named Gubbio and a ferocious wolf that had devoured the townspeople’s livestock and terrified them badly. St Francis, according to the legend, talked the wolf into ceasing its terrible habits and even blessed it, to everyone’s great amazement.

St Francis preached to people and animals emphasizing the beauty and magnificence of God’s creation. It’s not surprising that he was named the patron saint of ecology by Pope John Paul II. Pope Pius XII named St Francis and St Catherine of Siena patron saints of Italy. The Feast of St Francis is observed on October 4 by Catholics and other churches like the Church of England and the Episcopal Church in America.

Nevertheless, despite being so highly esteemed in the Catholic Church, it wasn’t until March 2013 that a catholic pope chose the name of St Francis.

Contact us today for a FREE quote for tree service needs. Torres Tree Service have been in business for many years, and has the knowledge and experience to make your garden dreams come true!