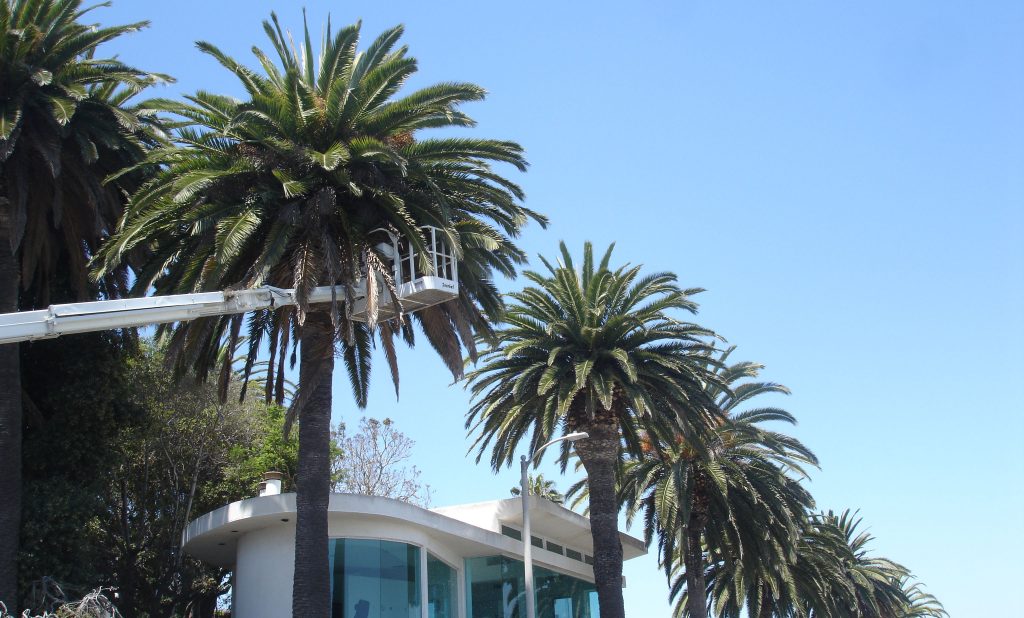 Tree Pruning is the most common tree maintenance procedure. Pruning is necessary to maintain safety, improve tree structure, health, satisfy specific goals, and make tree aesthetically pleasing. Improper pruning can cause damage that remains for the life of the tree. Knowledge of the tree’s response is required to achieve the desired objective.

Palms are low maintenance plants; however, most palms require regular pruning to keep them attractive and safe. Palms maintain a set number of live fronds. A regular turnover of ffoliage occurs as dying lower fronds are replaced by new ones at the apex.  It is preferable not to remove live, healthy fronds. If they must be removed, however, avoid removing fronds that are growing horizontally or those growing upward. Fronds removed should be severed close to the trunk without damaging living trunk tissue. There is little reason to shave or sand the trunk smooth. The pineapple shape crafted at the base of date palms is not necessary for good health of the palm.

Encroachment of tree foliage and or roots from your neighbor’s property is a nuisance. Please review the following 14 California Statues for reference.

Trees whose trunks stand wholly upon the land of one owner belong exclusively to him, although their roots grow into the land of another.

Trees whose trunks stand partly on the land of two or more coterminous owners, belong to them in common.

Coterminous owners are mutually bound equally to maintain:
1. The boundaries and monuments between them;
2. The fences between them, unless one of them chooses to let his land lie without fencing; in which case, if he afterwards incloses it, he must refund to the other a just proportion of the value, at that time, of any division fence made by the latter.

Any fence or other structure in the nature of a fence unnecessarily exceeding 10 feet in height maliciously erected or maintained for the purpose of annoying the owner or occupant of adjoining property is a private nuisance. Any owner or occupant of adjoining property injured either in his comfort or the enjoyment of his estate by such nuisance may enforce the remedies against its continuance prescribed in Title 3, Part 3, Division 4 of this code.

(a) For wrongful injuries to timber, trees, or underwood upon the land of another, or removal thereof, the measure of damages is three times such sum as would compensate for the actual detriment, except that where the trespass was casual or involuntary, or that the defendant in any action brought under this section had probable cause to believe that the land on which the trespass was committed was his own or the land of the person in whose service or by whose direction the act was done, the measure of damages shall be twice the sum as would compensate for the actual detriment, and excepting further that where the wood was taken by the authority of highway officers for the purpose of repairing a public highway or bridge upon the land or adjoining it, in which case judgment shall only be given in a sum equal to the actual detriment.

(b) The measure of damages to be assessed against a defendant for any trespass committed while acting in reliance upon a survey of boundary lines which improperly fixes the location of a boundary line, shall be the actual detriment incurred if both of the following conditions exist: (1) The trespass was committed by a defendant who either himself procured, or whose principal, lessor, or immediate predecessor in title procured the survey to be made; and (2) The survey was made by a person licensed under the laws of this State to practice land surveying.

(c) Any action for the damages specified by subdivisions (a) and (b) of this section must be commenced within five years from the date of the trespass.

Anything which is injurious to health, including, but not limited to, the illegal sale of controlled substances, or is indecent or offensive to the senses, or an obstruction to the free use of property, so as to interfere with the comfortable enjoyment of life or property, or unlawfully obstructs the free passage or use, in the customary manner, of any navigable lake, or river, bay, stream, canal, or basin, or any public park, square, street, or highway, is a nuisance.

A public nuisance is one which affects at the same time an entire community or neighborhood, or any considerable number of persons, although the extent of the annoyance or damage inflicted upon individuals may be unequal.

Every nuisance not included in the definition of the last section is private.

Nothing which is done or maintained under the express authority of a statute can be deemed a nuisance.

Every successive owner of property who neglects to abate a continuing nuisance upon, or in the use of, such property, created by a former owner, is liable therefor in the same manner as the one who first created it.

The abatement of a nuisance does not prejudice the right of any person to recover damages for its past existence.

The remedies against a private nuisance are:
1. A civil action; or,
2. Abatement.

A person injured by a private nuisance may abate it by removing, or, if necessary, destroying the thing which constitutes the nuisance, without committing a breach of the peace, or doing unnecessary injury.

Where a private nuisance results from a mere omission of the wrongdoer, and cannot be abated without entering upon his land, reasonable notice must be given to him before entering to abate it.